Astrology education for the mind, body and soul

Classes for beginners to professionals 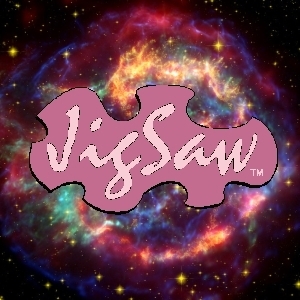 Please make sure to also include your entire postal address in your order.

Orders placed after 12pm Friday will be processed the following Monday (excluding holidays).

Three programs for the price of one, JigSaw 2.2 is the complete tool for:

JigSaw v.2.2 is a powerful astrological research tool designed to reveal the "big picture" in any group of charts. JigSaw v. 2.2 is divided into three sections: Family Patterns, Rectification and Research. Each section is composed of a distinct and different set of tools created for examining the astrological relationships between people and life. Jigsaw is a powerful and fun-to-use Windows™ program that enables you to find the connecting links in large or small groups of horoscopes.

Family Patterns features a first in the astrology world -- a Group Astro Dynamics Report written by the renowned astrologer Bernadette Brady. Never before in the astrological world has there been a report of this kind. Discover the psychological dynamics in your family or any group. Just input three or more charts, and specify the type of group (family, social, peer, competitive or decision-making). At the click of a button, you can produce a report of up to 10 pages consisting of the following:

The Family Patterns section also enables you to manually search for patterns within groups of charts. Once you have determined the pattern, you can click on the delineate button and produce your own profile report with interpretations. In the Display mode, you can view charts side by side in linear rather than ciruclar form. This immediately lets you see what degrees are shared by the charts.You will be absolutely thrilled with your ability to astrologically unveil the underlying purpose of any group. JigSaw’s Family Patterns module provides a fascinating way to study any human group.It can also reveal the common patterns in stock market movements, earthquakes, weather events and other groups of related charts.

Question: What is the most frequent zodiac sign of all the US President's natal points and all their midpoints?

Answer - 233 of the positions of the natal planets and midpoints of the 43 Presidents are located in the sign of Capricorn.

How long did that take to find in Jigsaw? About 30 seconds in the Family module

Rectification can optionally be automated, to speed the work of professionals and enable beginners to deal with unknown birthtimes. You just enter the natal chart details, giving a range of possible times, and then input at least ten life events. Instantly JigSaw comes up with a list of suggested birthtimes ranked in order of the scores that they receive when tested against transits, progressions and directions. This method of graphic rectification is the one used by Bernadette Brady. Click here (pdf) to read more about the theory of Graphic Rectification (pdf).

JigSaw also gives you full control to rectify manually.To help you select the most likely birthtime from the list of proposed times, it lets you recheck the life history against the suggested charts, letting you judge transits to the possible chart angles according to the type of event. As an aid to doing this, you can watch the transiting, progressed and solar-arc planets move around a chart wheel as you either click on each life event individually or move steadily through time.

Besides rectifying with transits, progressions (secondary and tertiary), and solar arc directions, you can use helio positions along with the usual geocentric.

Even when you know the birthtime, JigSaw's rectification module is useful for tracking how a chart has responded to transits in the past. This enables you to tweak a known birth time to improve the accuracy of forecasts. Plus - since it accepts input of events even when you don't know the exact time or date - JigSaw is the perfect place to keep a record of all your life events.

What are the most sensitive points in your chart to transits, progressions or solar arc?

Put your life events into Jigsaw's rectification module and find out in about 10 seconds flat!

Research becomes much easier - and can actually be fun - when you do it with JigSaw. To create a research group, you can, if you wish, enter birth data directly into this program. For convenience, JigSaw2.2 now includes the complete ACS PC Atlas, and it can automatically look up the longitude, latitude and time changes for you.

For all the charts in a large database, you can easily change the zodiac (tropical or any sidereal), house system (nine, plus equal from any point), node (mean or true) or coordinate system (geo or helio).

Most important, JigSaw makes it easy to generate matched or random control groups. You can also easily separate specific charts (like all with Mars in Aries, etc.) into separate data files for further study.

The data files that you create can be of unlimited length. To each record, you can add unlimited numeric or textual data fields, and then you can use JigSaw’s Boolean logic to select or filter the records in the file.

JigSaw’s powerful Criteria Search offers an almost endless list of conditions you can search for. Just some of the possibilities include planets in signs, houses, decanates, essential dignities, declinations and azimuths.

Select any combination of criteria, and you’ll quickly get a graphic display of the results. Both bar and polar graphs let you see in a flash whether the effect is worth pursuing, and tables give you the exact figures. To get an instant chi-square evaluation, you can simply click on any part of a table or graph.

JigSaw enables you to keep a file of notes on each of your projects. You can also make high-resolution printouts of all the charts, tables, graphs and diagrams, either for a personal record or for articles and research papers. Plus, in the new 2.2 version, you can copy your research results into emails and word processing documents.

Question: What do ALL 43 Presidents of the USA have in common in their natal charts?

Answer: None of them have their natal Moon in Pisces!

How long did that take to find in Jigsaw? About 30 seconds in the Family module

For JigSaw FAQs and more information on the program's features visit the website of JigSaw's co-author, Bernadette Brady

Bernadette Brady, MA, is an internationally known Australian astrologer, inventor of the Brady Rectification Graph and author of The Eagle and the Lark: A Textbook of Predictive Astrology (Weiser, 1992). Ms. Brady designed JigSaw to do the Graphic Rectification technique she introduced in 1983, and the family patterns research she has since done, inspired by the work of John Addey, Ruth Armstrong and Michael Harding. She also wrote the JigSaw manual, which reads much like her witty, enthusiastic lectures.

Graham Dawson has degrees in Physics and Meteorology and a Ph.D. in Oceanography. He has also worked as a professional software consultant in Australia and the U.K. Besides writing the entire JigSaw program code, Mr. Dawson collaborated with Bernadette Brady in designing the JigSaw Research Module. An esotericist and astrologer, he also designed and developed the widely acclaimed Solar Fire astrology software.

Link will arrive in 2-4 business days after receipt of payment.

NOTE: Windows tablets must have the Windows 8 Pro operating system to run this program. Windows 8 RT will NOT run JigSaw.

Save this product for later

Kepler College received its training in how to teach astrological studies from 12 years in the stringent world of academia and government regulations. We took the lessons in excellence from that experience and translated them to provide our current educational program for everyone who is serious about their astrological development.

Today we have three types of offerings available for anyone with an Internet connection:

1. Community Webinars (our gift back to the astrological community). We invite astrologers with a variety of backgrounds to present one or two donation-supported online webinars each month. Everyone who signs up, whether or not they can attend the webinar, receives a copy of the recording;

2. Workshops for Continuing Education. These are short workshops (from 2 to 24 hours of lecture) for astrologers who want to continue their education and build new skills; and

3. Courses for Certificates and Professional Diploma in Astrology. These offerings consist of intensive in-depth courses for astrologers who want a structured educational environment. Students will have an online course website, assignments, regular live online meetings and lots of feedback to ensure that they can use what they have learned. Courses are either 5 or 10 weeks in length. Students spend at least 8-10 hours per week on the material presented.

The Certificate and Diploma program introduces students to a variety of astrological approaches and techniques. This way students can expand their choices and find where their passion for astrology truly lies. In addition, students will have multiple teachers through their courses, giving them the opportunity to ask questions about how different astrologers approach their practice.

Along with their courses, students in the Certificate and Diploma Program will have access to an online library, a student resources section and the ability to form their own support groups as they develop their skills, as well as classes and support for establishing their own astrological business. 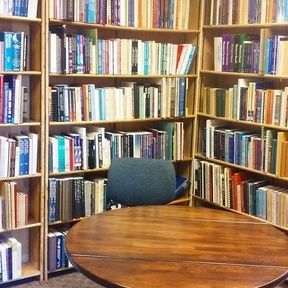 or visit Kepler's Maggie A. Nalbandian Library in Lynnwood, WA

Kepler College started in 1992 as wild dream by astrologers seeking to create a unique educational institution for astrological studies. It first opened in 2000 as an academic college authorized by the State of Washington to grant degrees. After the economic downturn of 2008, the academic side closed down - but our goal of bringing together the best instructors from different branches of astrology to build a superb online environment for astrological education remains!

Kepler also has one of the largest astrological libraries in the Pacific NW just a few miles north of Seattle, WA.

Whether online or in person - we hope you will visit us!

Kepler Office and the Maggie A. Nalbandian Research Library